One does not speak with Patty Torres for very long before her admiration and love for her family enter the conversation.  It is easy to understand why: Her father emigrated from Mexico to the United States as a seventeen-year-old and began a lifetime of farming and work in various states. He returned and brought his bride back a few years later.  Together they raised six children – three girls and three boys – in California. All six of the siblings graduated from a four-year university. To this day the family all live near one another and spend time together weekly, if not daily.

Hudson’s G-pa, Andrew, is one of Patty’s colleagues at Farmers Insurance where her career has spanned more than 30 years.  It was in this setting that G-pa shared the story and mission of Buzzy’s with Patty and it struck a chord.

While her parents raised their children in California, one of her mother’s sisters remained in Mexico. Patty described the situation as one of extreme poverty. In this setting, Patty’s aunt had eight children. Only four survived. There was no money to take photos, to capture any memories of these lost ones. There was never any information on the cause of death for the babies. They were baptized and buried. Her aunt never spoke of them. This especially weighs on Patty and her sisters. Embracing their Mexican culture, they celebrate Día de las Muertos. But the babies have not been part of the days of prayer and remembrance of the departed.  Patty and her sisters Elsa Meza and Christina Torres believe these little ones to be important, part of their beloved family.

With these thoughts swirling and having learned of Buzzy’s Bees, Patty talked with her long-time friend and mentor, Pauline Mead. Pauline is a maker, a quilter, so Patty speculated that it might be nice to create a bee quilt to contribute to Buzzy’s. She expected to chat with Pauline about it sooner or later, but Pauline sprung into action right away. Within days she had selected a pattern and fabric and was sewing the quilt.  Some 70 hours later, she offered it to Patty to present to Buzzy’s Bees for our fundraising efforts in the fall of 2021.

Of course, the event was exclusively online – thank you COVID – and a photo accompanied the posting of the quilt. It is often difficult for those who are not makers and creators to recognize the value of items offered, especially if not seen in person. Patty tuned in to the auction and was disappointed to see the quilt receive a high bid of only $100 as the auction came to a close.  She knew she could not report this to Pauline, so Patty made a winning bid of $200 and came up with an alternate plan to raise money for Buzzy’s with the quilt.

Patty’s sisters Elsa and Christina joined the effort and the three organized a raffle on Facebook, offering tickets for $5 each or 5 tickets for $20. By the close of the raffle, they had raised $1600 for Buzzy’s Bees!

We are truly grateful for the effort, persistence, and generosity of Pauline, Patty, Elsa, and Christina. This project – independent from our team efforts – fills our hearts with gratitude.

P.S. Pauline has completed a second quilt for Buzzy’s Bees. It will be raffled sometime in September. We love it! 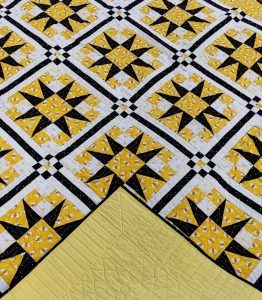 One does not speak with Patty Torres for very long before her admiration and love for her family enter the conversation.  It is easy to understand why: Her father emigrated