Father’s Day is here.  Greeting cards appear alongside the “Congratulations, Grad” display.  Television and print ads invite you to help make it special.  Purchase the coveted grill or smoker and your dad will be happy.  For some fathers, however, the day is one of the several annual reminders of the loss of a loved little one.

Buzzy’s Bees seeks to support grieving families in several ways, including education.  An online search of information for grieving fathers returned rather meager results.  A clue to that was found in the April 2021 edition of Pediatrics, the official journal of the American Academy of Pediatrics.  Michael J McNeil, MD and colleagues published a paper, “Grief and Bereavement in Fathers After the Death of a Child:  A Systematic Review.”

One of the key findings of their literature search is that, “Historically, 75% of parents studied in pediatric palliative care research have been mothers, and the specific grief and bereavement experience of fathers remains underinvestigated.”

Their findings were, not surprising, that fathers grieve differently than mothers.  They do so more in isolation, not communicating as much as mothers.  Though gender roles have evolved over the last several decades, the cultural, societal, and religious context of their lived experience means that many fathers use goal-oriented tasks at work and home to cope and are more stoic in their grief.  It was noted that while mothers often had a more intense grief response and PTSD after the loss of a young child, this diminished sooner for moms and lasted longer for dads.

The study was somewhat limited based on the criteria the researchers used, and fewer fathers participate in grief studies.  But gathering more information from fathers would provide better understanding and lead to better care for fathers after the death of a child.

The findings of their review and video abstract can be found here. 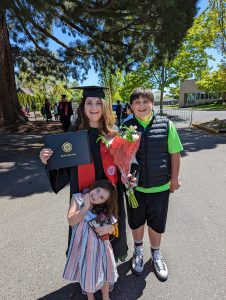 Six years ago today on this very day, May 21st, 2016, I buried my 13-month-old son Hudson. Today I graduate from Pacific University with my Bachelor of Social Work. In